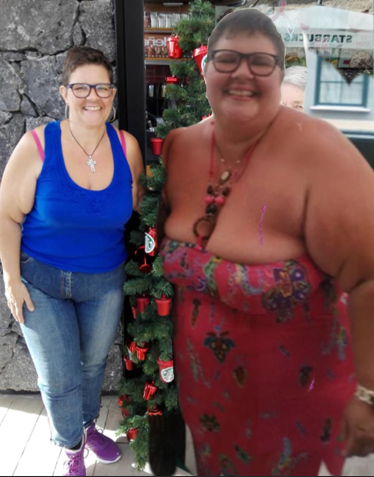 Becky Robinson had always known something wasn’t right with her health. She never imagined the journey she’d have to take.

Today is a good day. The pain is as faint as it gets, I can walk without my sticks and that’s not something that happens every day.

I’d always known that something was off health wise. At school I got every bug that went around, but it was just brushed aside.

In my early 20’s I was in and out of hospital with stabbing stomach pains. I had scan after blood test and blood test after x-ray…but nothing came up. At one point it was even implied by the doctors and school nurse that it was in my head.

Fifteen years ago, I was rushed into hospital again with the same stabbing pains. There was one thing different I was living in Tenerife.

The doctor initially couldn’t find anything. He saw the level of pain and ordered more extensive blood tests. This time something was showing as different. The relief was overpowering, relief, gratefulness and elation, then came the fear.

Because of the location of the pain they focus was on my gallbladder.

It took ages but hidden inside the walls was a stone. All they had to do now was remove it. As it was in the lining, they had no way to safely blast it, so an operation was needed to remove them. Little did I know it would be the first of many.

Once I came around from the anatectic, I was in discomfort, but the searing pain was gone. The doctor took more bloods, just to check. They were still off, if anything they were worse.

After extensive test, the outcome was worse than I could have imagined.

I was diagnosed with Autoimmune Hepatitis. What this means is my immune system attacks itself. In my case my liver was three times the size it should be. It turns out my size 26 bulk gave it the room it needed. My immune system had turned on itself and was attacking itself. I was in hospital for almost three weeks and on some heavy-duty medication including steroids. I blew up like the Micheline man and felt like my life had come crashing down. Little did I know that there was still one more nasty shock to come.

As a result of additional weight, I was carrying due to the steroids, it became more and more painful stand never mind walk. For the third time I was in hospital being prodded and poked. Once more the result would be life changing in more ways than one.

My surgeon said “I’m sorry Becky but you’re going to need a double hip replacement. The bones in your hips are dying.” These are not exactly the words a 35-year-old wants to hear. It turns out this has been slowly happening for years, it’s just the additional weight pilled on the pressure.

New hips don’t last forever. Because of the medication I was on there was no way I could have lost enough weight on my own to make any difference to the pressure levels. I was offered a gastric bypass, providing I passed the evaluations needed.

I passed everything, and I was put on a waiting list.

It was around this time that a good friend invited me to attend an event at her church. I’ve always dipped in and out of religion, and to be honest I needed all the help I could get. One visit turned into what would become my lifeline.

I began attending weekly, no-one judged me on my size, my mobility or conditions. As a way of keeping positive I began going along to bible study classes. For the first time in my life I felt I was part of something.

Less than six months later, I was back in a hospital gown waiting to be taken to the operating theatre being prepped for a gastric bypass. It would reduce my stomach to the size of an egg cup.

One thing was definite, I’d never enjoy the wonders of a steak and chips washed down with a bottle of Rioja again. Alcohol and fatty foods are banned, as is salt and all the tasty goodies are off the menu, at least for the next couple of years.

Initially call I could eat was a teaspoon of puree, then the kind of veg that my gran would cook.

Even now, I can eat less than a child’s portion of anything. On the plus side, the weight has fallen off.

Within a month lost about three and a half stone and people told me they could see the difference, but more importantly I had more energy and felt generally better. It’s like my batteries had been charged up and I had more energy.

Before I had the op, I was told by a friend who had the same procedure several years before “you won’t realise how bad you feel now until you feel better.”

Within two months I was able to walk short distances without my sticks and that felt amazing.

There are downsides I’m not going to lie, because of the speed of the weight loss, and exercise limitations there is an issue with excess skin.

Forget bingo wings I’ve got a full casino hanging under my arms. It’s the same story with my tummy and legs.

It can be embarrassing, but the decision to do this was out of a desire for the perfect body, it was to prolong the time my hips will last.

After almost eighteen months I’ve lost just over 11 stone. The weight’s still coming off, just at a slower rate.

Because of the excess skin, the surgeon has had me under the knife again. This time for a tummy tuck.

Without question it makes me look better, at least it will when the swelling goes down, but it’s got rid of six pounds of skin. Every bit of excess weight I can get rid of the more my hips will thank me.

Even with the surgeries I’ve never been completely pain free in my hips, but it is easier than it was. The pain is now management without constant medication. I can walk half way up the stairs before having to stop, before the weight loss I was stopping after every step.

A couple of months ago I discovered that in addition to new hips I also need new knees. The doctors say is because I have not been walking properly for so long and arthritis that has taken over the joints.

As a woman knocking on the door of 40 this isn’t exactly what I thought my life would be like, but it’s the only life I have, and I don’t plan on wasting it.

I have an amazing group of people supporting me. Because of the deep faith I now have, I honestly believe this is a test, and one I plan on passing with top marks.

It would be easy to fill my life with woes and pity, but what’s the point? You only have one shot. My Dad had a saying “you only live once and you’re a long time dead”.

I know my medical team almost as well as some of my family, but they keep me functioning and for that and them I am forever grateful.