There are currently two petitions doing the rounds.

One in favour of Revoking Article 50, and one to walk away now.

Both petitions began in response to recent developments in the seemingly endless Brexit negotiations. 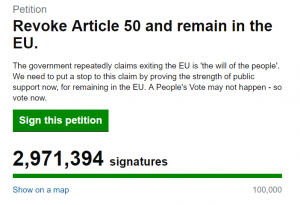 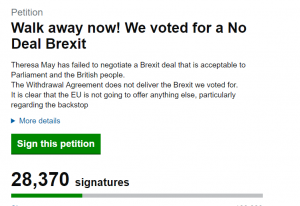 Regardless of which side of the debate you stand, passion is running high. Remainers believe that in light on the ongoing unrest and discord among the very people tasked with guiding the country, the only reasonable  action is to put it back to the people.

Would a clearer understanding of what is at stake, and realism of a no deal exit change people’s minds?

Should the country walk away on the 29th March 2019 with no deal regardless of the consequence?

After seeing the rapid escalation in signatures to the Revoke Article 50 petition Lord Adonis said via Twitter ‘I intend to move for the revocation of Article 50 in the House of Lords on Monday’.

The Labour Party members tweet has been liked over 30,000 times and shared over 6.6 thousand times.

This statement contrasts with the Prime Minister’s statement in which she stated she ‘will not countenance’ revoking Article 50.

In addition, Lord Adonis will be appearing at St Aidan’s Church and Community Centre on Friday 22nd March and 18.30.

In the time taken to write this short piece the number of signatures gained for the Revoke Article 50 petition has risen to 3,153,370 and Walk Away Now! Remained at 28,370.